Nail of the Day: A Greenish Medley.

I know I bought two lovely new polishes yesterday, and I am really excited about trying them both, but I've also wanted to put my new base coat to the test, and do some nail art again.

I decided that I'd use two other new polishes: Jade Stone and Top Turquoise (which I received earlier this month) and because I couldn't decide which design I wanted, I did 5 different ones! 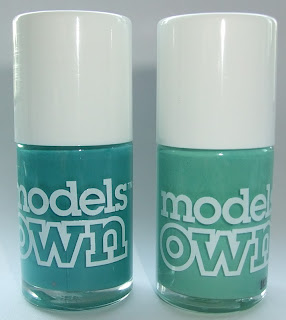 I used my new base coat- Sally Hansen Double Duty (which so far I really like, my nail polish did feel a lot smoother when I applied it, but we'll see if it makes a difference to the longevity of my polish- which is really what I want it for) and two coats of Jade Stone. 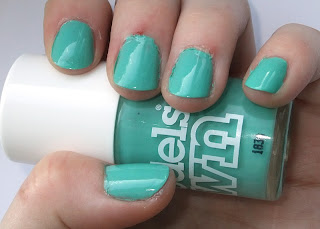 On my thumb I attempted taping for the first time, and I have to say I found it a lot easier than I thought. I made sure my tape was very de-stickied and it worked quite well for me, I think I'll be doing it again sometime :)

My index finger was dotted with a large dotting tool- I tried to space the dots out evenly and it mostly worked. I did really tiny dots on my little finger too- using my smallest dotting tool.

I decided that nail art wasn't complete without some Konad- and I added the grid pattern from the m57 on my middle finger, followed by the flower from the same plate. Top Turquoise wasn't the best for stamping over Jade Stone- it didn't turn out too bright, but I think the colours go well together, and black stamping wouldn't work as well for this design.

I tried striping for the first time on my ring finger, and it turned out OK, I'm not particularly good at straight lines... But I will only get better with practise! 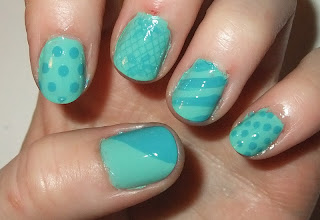 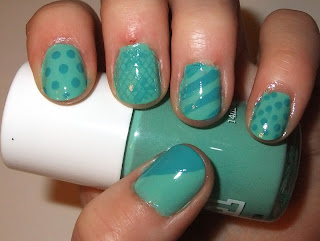 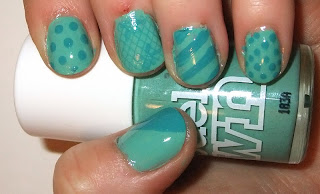 What are you favorite nail art techniques?

p.s. You can see my nail art tools, including my Konad plates in this post
Posted by GretalRabbit at 21:21