Challenge Week 6: Inspired by a Game!

This is a new theme in the 52 week challenge, and although there are a lot of games I love (my family love board games and card games) I couldn't decide what I'd like to do. I wasn't until I discovered an online version of UNO that I decided.

I have awesome memories of playing UNO with my Granda, we'd visit my Granny and Granda every Sunday for dinner, and while the other adults chatted and did boring things, my Granda would always sit on the carpet with me and play (what felt like) hundreds of rounds until dinner was ready :)

So yes, UNO nails it is: 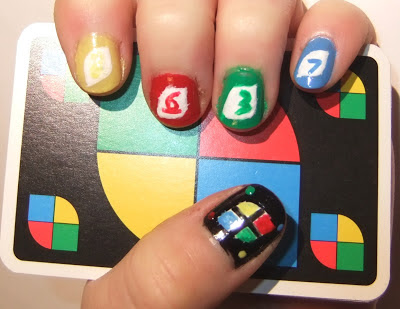 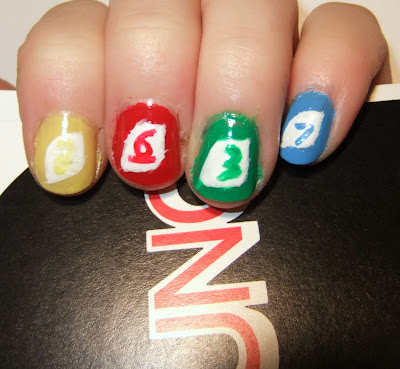 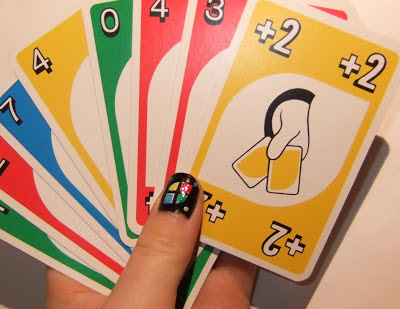 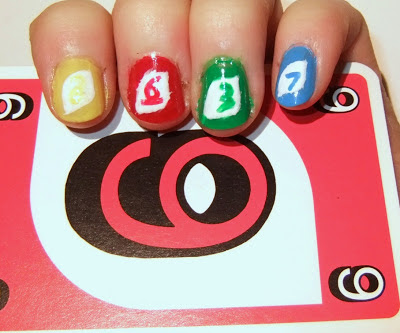 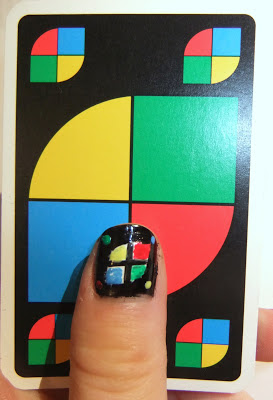 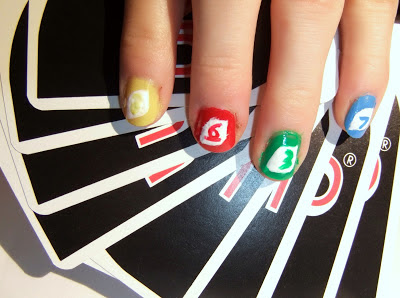 I had a lot of fun painting these, and making my sister play UNO with me once I'd taken out all of the cards for inspiration and taking pictures :) 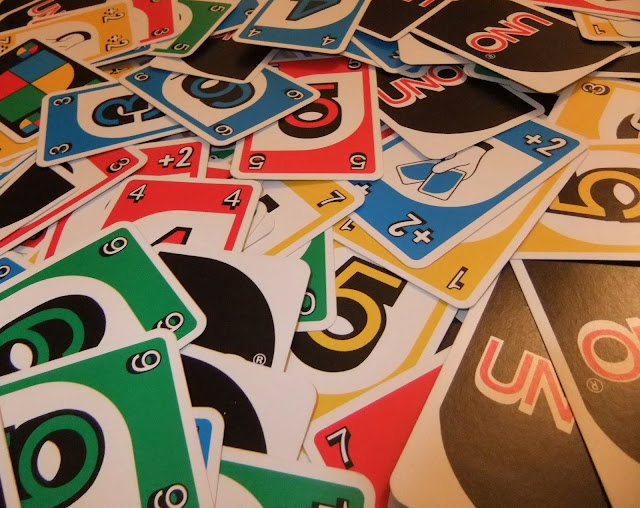 I used a base colour of green, yellow, red and blue for the coloured card nails, and black for the 'wild card' nail- then I added the white shape over the top with white polish and a tiny nail art brush- and on the very top, the coloured numbers (also with the tiny brush)

I actually painted these nails quite a while ago now, and putting this post together has made me realise how much I really miss it!

When was the last time you painted your nails?

Looking Back... and Looking Forward...

I know it's now the 20th of January, but I have been ill and incredibly busy at work (I'll get to that) But it has been another whole year and I thought I should mark it by sharing the high-points of it, and my hopes for 2013 :)

Once again my Lush lip scrub dupe post was my most popular- almost 1/4 of my total page views (thank you Pinterest) but my nail polish swatches took over as the 2nd most popular- and that post needs some serious updating now! :)

I know I have somewhat neglected my blog in recent months, and I know I keep saying that I want to change that- but I'm sure you can appreciate that life gets in the way; work has been really busy, I keep getting colds and I've far too much time being unproductive in front of the TV... I've also missed reading all of your blogs- I've not checked my GoogleReader in about a month! :(


And that's where my resolutions come in:

1) Eat healthily- as I mentioned in last years resolutions post, this was really hard when I lived with my family, there would always been junk food in the house- and my will power is not that strong. Now I'm living on my own I have just refused to buy rubbish food. Plus I've decided to go on a gluten free diet (one of my housemates is totally gluten free, and living with her made me think a lot more about what I was eating, and how bad I feel when I eat gluten!) which is already making me feel SO much better :)

2) Catch up with blog reading!

3) Exercise more, yes another thing I added last year, but again, this resolution is already going well. I'm  walking to and from work every day now- it's only a bout 10/15 minutes each way, but it's a lot better than nothing! And my housemates have an Xbox Kinect with Dance Central (so much fun) and we all have several work out videos that make exercise fun- so that is a lot easier too!

4) Blog more! It is my new years resolution to post twice a week- one 52 week challenge post (which I know I am stupidly behind on, but I want to carry on!) and another post about whatever else. I know it will be hard to keep up with, but I am determined to at least try.

5) Stick to my budget. Now that I'm paying rent and bills and all that boring stuff, I have a budget and I must stick to it. Don't worry, I've budgeted for beauty buys :p

6) Keep doing well at work. I had my 6 month review just before Christmas and I'm thrilled with the feedback. My supervisor has chosen me (over several people who have been working with him for over a year) to take over some of his current tasks- saying he could trust me more than anyone in the department to get the work done accurately and on time (I put together the daily figures for our department, and get them sent off to the 3 company directors we deal with) So yeah, it's quite a bit of extra work, and I have been working late and feeling more stressed; but I'm really loving the challenge, and I hope it continues.

7) Read new books. I've read a lot more books since I got my Kindle, but I have this bad habit of slipping back into books I've read 10 times already (I'm currently reading HP Deathly Hallows again, I've literally read it probably 15 times...) it's such a cosy feeling to read a book again and again, but I know I should read more. I have a GoodReads account now, so my 'to read shelf' helps me stay on track a little better.

Well I think that's enough for me this year. What are your new years resolutions? Have you stuck to them so far?