Amy got seasons 1 and 2 of Glee on DVD for Christmas and she's barely stopped watching them all on repeat since (I'm getting so fed up of it I think I may have to hide the DVDs...) but I suppose SOME good has come from it- when an obsession can translate into pretty nail art I can only approve :)

If you're familiar with glee you'll know that the poor characters get slushies thrown over them quite frequently (they're not exactly the popular kids in school) and a lot of the promo pictures feature slushies too! 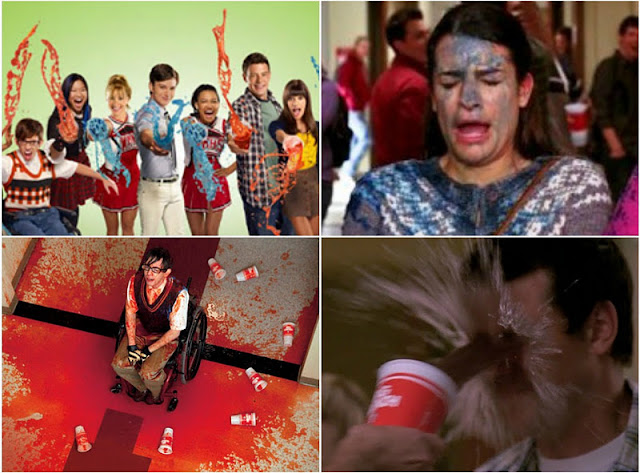 So my decided to do slushie nails- her thumb is the 'Big Quench' cup, and the other nails feature slushie that looks as though it's been thrown over the nails from the cup on the thumb- I think it's pretty cool! Amy also wrote glee over the nails, first in white as an outline, then in red, just using a small nail art brush. 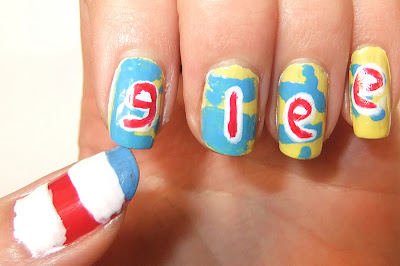 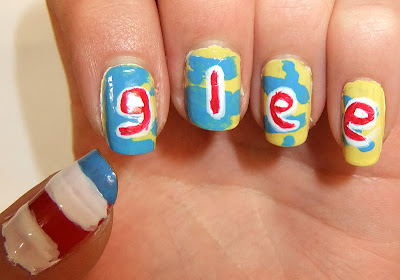 As usual she ever-so-helpfully forgot which polishes she used... but I am 99% certain (thanks to my in-depth knowledge of polishes﻿) that they are: Barry M Pale Yellow, Models Own Feeling Blue, Models Own Snow White and e.l.f. Light Red.
I wish I were as good with nail art brushes, I know I should probably practise more, but Amy's one of those annoying people with a natural ability...
xGretalRabbitx
Posted by GretalRabbit at 19:23