(my sisters) Nail of the Day: Harry Potter Puppet Pals :)

As I mentioned in Amy's last NOTD (starkid nails!) being at home for the holidays has given her a lot more time to paint her nails, and this time she created a Harry Potter Puppet Pals themed nails. If you've not seen puppet pals I've posted their most popular video below, watch it, it's hilarious! :)


Amy chose to draw Harry, Ron and Hermione as well as Dumbledore and Voldemort. I'm fairly certain she used Models Own Feeling Blue as a base, and Revlon Peach Smoothie for the faces- and she must have used Models Own Snow White and e.l.f. Black (both shown yesterday), but the other polishes are anyones guess :) 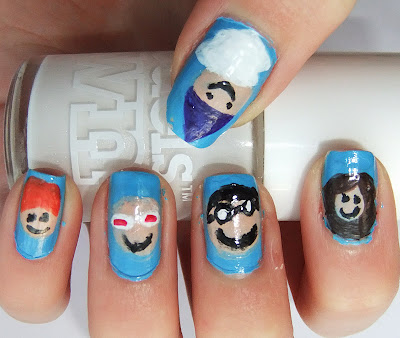 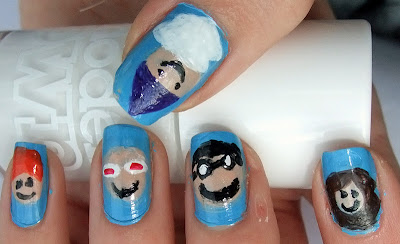 And some close up pictures of each nail:

Amy only used nail art brushes for these, and I'm jealous because they are so much neater than I could ever do- generally speaking she's the artistic one and I'm the academic one!

Are you a fan of puppet pals? It got popular years ago now, but it still pops into my head now and then (and since watching the video above it's become lodged in my brain again!

Apologies if you're not much of a fan of nail art posts- there have been a lot recently, but because Amy's still at home I'm still kinda in holiday mode- I'll get my act together and write some reviews for you very soon!