So after 2 whole posts leading up to this pie- with the pumpkin puree, and the shortcrust pastry recipes I posted yesterday, it's time to actually put everything together! Don't worry, it is definitely worth all the effort :)

This recipe is adapted from the hummingbird cookbook, and several other online recipes- it's essentially a mish mash of all my favourite parts of various recipes, but it worked very well. 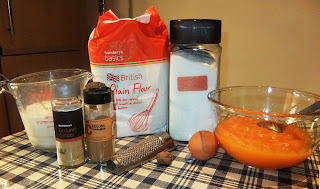 
This recipe is (once you've gotten past the puree and pastry making) super super simple...

2) Place the egg, flour, pumpkin puree, sugar, spices, salt and evaporated milk* into a large bowl and mix thoroughly with a spoon- making sure there are no lumps and the ingredients are well combined. 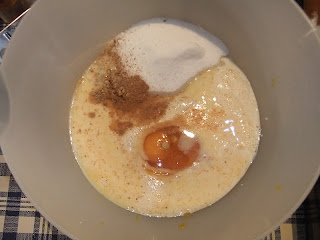 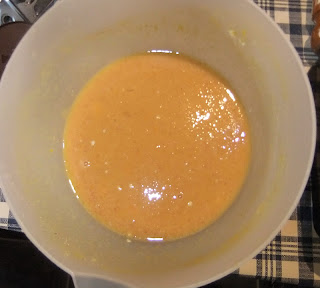 *regarding evaporated milk: I somehow managed to not have any in the pantry (which is odd, as it's the kind of thing that we usually always have...) but the internet reliably informed me that skimmed milk powder (which we always have in because it's used for bread making) made up with water at double the strength the instructions call for, works just as well. This alternative is also much cheaper than buying evaporated milk, and I think I'll be using this method from now on- as it provides exactly the same taste/texture as evaporated milk when used in cooking :) 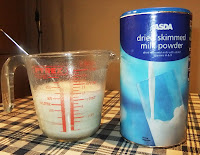 3) Place the pie crust onto the oven shelf (pulled out) and carefully pour the filling into the dish, then push the shelf back into the oven.

I prefer to do it this way as it means no precarious carrying-of-the-filled-pie-crust-to-the-oven (which is at about head height for me!) as I am quite likely to spill all of the delicious filling all over my feet...

Bake for around 40 minutes- until the filling only has a very slight wobble to it. 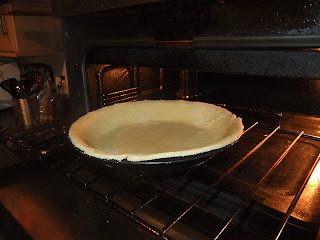 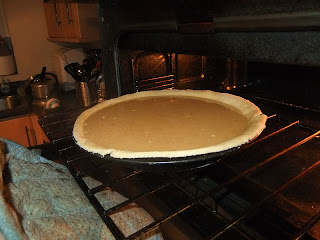 4) Once it's cooked, leave it to cool completely, and enjoy! You can serve it with cream or ice cream if you wish, but I love it on it's own :)

I had a little leftover pastry and filling (my pie dish wasn't quite as big as the recipe required) so I made two mini pies in a muffin tin :) Unfortunately I haven't managed to take pictures of the actual pie, but I devoured a mini one as soon as it was cool enough, and remembered to take pictures! 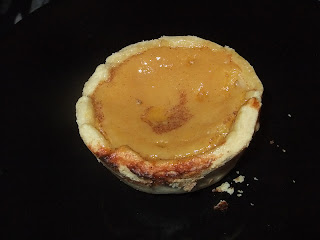 My silly sister, who complained throughout the whole pie-making process: about the pumpkin puree smelling horrible/ that she hated pumpkin/ it wasn't fair that I was baking something she wouldn't like.... took one bite of my mini pie (after much convincing that it didn't taste at all like vegetables, I almost had to force her to try it!), and promptly ran to get the other mini one- and now she's pestering me to make another one (and there's still at least 1/3 of the original pie left!)

I think next time I make it I'll decrease the amount of sugar I use- the pumpkin I had was quite sweet on it's own (I was planning to make some pumpkin soup but I think it's too sweet for that) and it didn't need all that much extra sugar, but that will depend on the pumpkin you have; I suspect that the homegrown pumpkin I had would be a lot sweeter than the typical shop-bought pumpkin.

What's your favourite type of pie? Now I've 'mastered' shortcrust pastry I'm quite interested in trying lots of other varieties :)