I was really excited to try this mascara out, as I'd never tried this kind of brush before- it's an hourglass shape :) And I know I generally enjoy 17 mascaras, so this was a very easy choice for me (especially as it was included in Boots 3 for 2 offer, so I actually got it free with the purchase of my two new lip butters!)

I really like the packaging of this mascara, the pink shade is pretty unique for a mascara wand, and the pretty lace effect on the top is a nice touch. The shape of the tube echos the shape of the wand too- clever packaging designers!

There are two shades available, Black and Brown/Black, and costs £6.29 (though it's currently only £4!) As usual, I picked out the Brown/Black shade, as I find black to harsh against my pale skin for day-to-day use :) 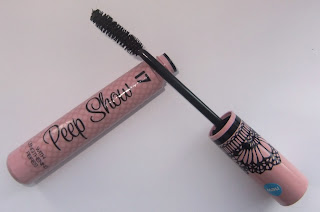 I think I've really fallen in love with the brush, the shape makes it so easy to use, and it grabs all my lashes (especially my outer corner lashes, which often stick out at odd angles and escape mascara). I generally do prefer bristle brushes, rather than rubbery ones- they seem to coat each lash better, and this is no exception.

The only small problem with it is that the end is flat, and does tend to gather quite a bit of excess product on the end; nothing a quick swipe against the tube wont fix, but kind of annoying nonetheless. The flat to also means that using the tip to get into smaller sections of lashes (which I sometimes like to do with the outer corners) is very hard. 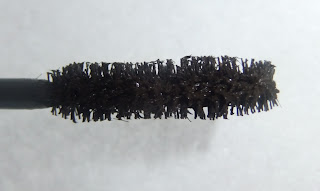 I hope you can tell from the above pictures that the formula has a lot of little fibres in it, they are supposedly to give length and volume without clumps, but I don't find it lengthening at all (a good thing for me, as my lashes are long enough on their own) It does, however, provide quite a bit of volume- making each lash look a little thicker and, and my lashes look fuller :) 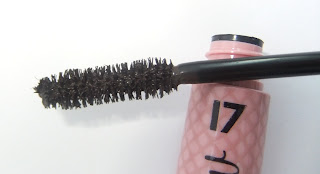 The fibres do make the formula quite heavy, and after application I do have to re-curl my lashes to make sure they are properly curled as they are weighed down by the mascara (very important for me, as my lashes are very straight) though once the mascara is dry/set, my lashes stay curled and in place until I remove my make up.

I definitely don't have any issues with flaking throughout the day either, once it's set it really doesn't budge! And like the other 17 mascaras I've tried, it does not claim to be waterproof, but does last through rain and tears very well, as long as you don't rub at it when it's still damp.

I also have a little trouble with clumping after application- I think again because of the little fibres- but thankfully it's not really a problem for me, as I always use a little wand to brush through my lashes no matter which mascara I use. I know it might really annoy some people though, as I haven't really found a way to apply it with no clumps. That said, I think my lashes are prone to clumping, as they are so long they tend to hit each other then stick together...


Overall, I do really like this mascara, the problems I have with clumping and needing to re-curl are definitely outweighed by the awesome brush and the staying power. Though I'm not sure I'd repurchase it- I would recommend it to those who like the fibrey mascaras, and want a nice volumising mascara for everyday :)