My sister decided to hold a surprise birthday party at our house for he best friend last week- and naturally I was expected to bake a cake, but being a bunch of 14 year olds- they have to have a huge fanatical (sometimes very weird) obsession on someone (when I was that age, it was Westlife...) so the cake had to be very specific.

For my sister and her friends their obsession happens to be Darren Criss; he plays Blaine in Glee, has a solo album and wrote some of the Starkid musicals... I could go on... but suffice to say, Amy has told me wayyyy more than I would like to know about this guy, and apparently he likes to wear pink sunglasses:

And he got a pink sunglasses shaped cake for his birthday one year:

So I was informed that for the surprise birthday party they 'needed' a copy of that cake... (luck me!)

Not one to back down from a challenge I actually made it, and I don't think it looks too bad! :) AND it tasted good! 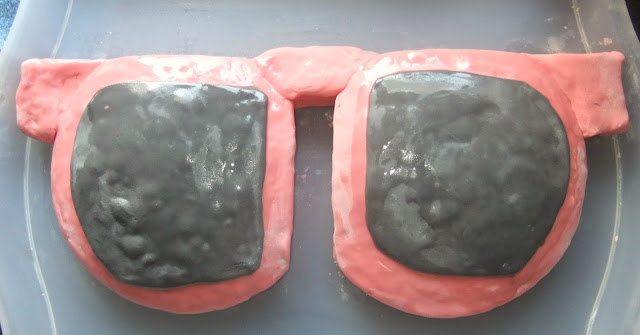 I used my Super Simple Cupcake recipe- with 8 eggs, which made 2 large round cakes for the lens/frame part of the cake, and another small square cake which I needed to form the bridge and arms of the cake.

When all the cakes were cool I made templates out of paper, as a guideline to cut out the cakes- the large circular cakes needed just a bit of shaping, and the small square was chopped into 3 smaller sections and made into the side and centre pieces.


Next I added pink and red food colouring to ready to roll icing- to make the 'right' shade of pink, and black colouring for the lens colour (which gave a dark grey shade, no matter how much colouring I added!)

And finally, I used apricot jam (details here) to stick rolled out icing onto the cakes, and stick them together to form the shape of the sunglasses. 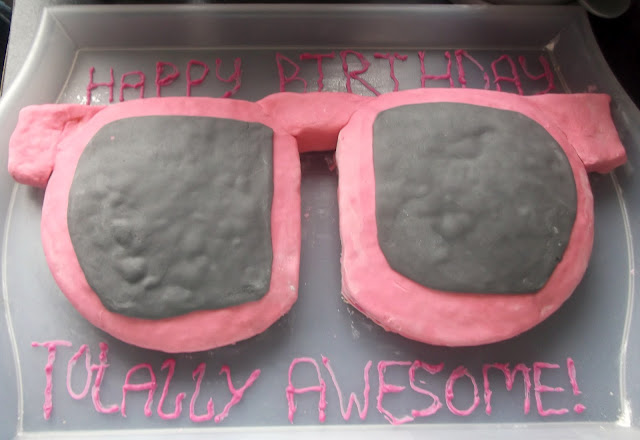 Have you ever made an oddly shaped cake? It was actually relatively easy, paper templates are definitely the way forward (and I'm sure you could print one off if you're not much of an artist!)