Over the past week I've bought rather a lot of stuff- I have some nail art things on their way in the post (I'll show you them when they arrive) but what I'm showing today are the items I picked up from my Boots order and some other from Superdrug and Boots- there's lots of exciting things!

First of all I'm super-happy that Loreal have brought their EverStrong range to the UK, they are currently on 2 for £9 in Boots so I picked up two bottles of shampoo in the Reinforcing & Vitality variety- that I've already tried and reviewed. 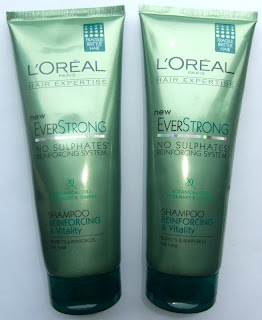 Next up are a couple of nail polishes- I had to buy a Barry M Croc Effect for my sisters friend (it's her birthday) and as Barry M polishes are on a 'buy two and save £1' deal, I thought it would be rude to not pick up a polish for myself. I decided upon Peach Melba as I've seen and heard so about it recently- it must be popular for a reason! And it's not at all similar to any other polishes I have.

﻿﻿ ﻿﻿
And because of the Barry M purchases I got a £5 off No7 voucher, which naturally I had to spend... So Simple caught my eye on a shopping trip last week and I love the look of it- a pinkish nudey shade. It's odd though because I'm sure I've never seen it instore before (and I know the No7 polish stands rather well) but it's not a new shade as Google search brings up NOTD posts from last summer. Maybe Boots only sells it in Spring/Summer months? (answers on a postcard!)
I stumbled upon a total bargain in Superdrug today- Sally Hansen Insta-Grip was on sale for 49p!!! I couldn't believe my eyes and accosted a member of staff to double check the price for me- obviously I couldn't not buy it for that price, especially as it was one of those I considered when looking for a base coat a while back. I'm interested to see how it compares to my current base coat (Sally Hansen Double Duty) though as it's Sally Hansen (a brand I rather trust) I can imagine it being brilliant, and WELL worth 49p!
I ordered several Maxfactor items from Boots online- mainly because I was a little desperate to get hold of Fantasy Fire! I picked up two bottles of Fantasy Fire (one for me, one for my sister) which I will show you sometime very soon (I think my next NOTD post)- I did want to show you today but I couldn't get my camera to capture it properly and I really hate publishing pictures I don't like- so I'll try again in proper daylight (I tried at about 5pm today and it was nowhere near bright enough!) and do the beautiful polish justice :)

I also picked up a Colour Elixir Lip Pencil- I've been wanting to dry a new lip pencil for a while (I have an e.l.f. one but I don't like it too much) and as maxfactor have a free gift with £12 purchase I figured I may as well give them a try. So far I really really love this pencil, it applies really smoothly and absolutely will not budge (the swatch on my hand has lasted about 2 hours now- lasting through several hand washes and vigorous rubbing to test it) plus the colour is lovely- it was a bit of a wild guess as I picked it out from the online 'swatches' but I'm really pleased with this one, it's 04 Pink Princess; a deepish pink shade :)

And the gift with purchase is lovely too- you get a pink purse/ make up bag with two nail polishes (Disco Pink and Intense Plum), the teeniest Kohl Pencil I've ever seen in black and a sample of Masterpiece Max mascara (in black). I like the polishes (not particularly daring shades) and I like trying out new mascaras- and this one has odd little soft rubber bristles (I'll let you know how I get on with it!) and it's handy as I think my lovely 17 mascara is on the way out...

﻿﻿﻿﻿
﻿﻿﻿﻿
What have you been purchasing recently? Have you given in and bought Fantasy Fire?