Challenge Week 22: Inspired by a Flag!

So this weeks 52 week nail challenge theme is 'inspired by a flag'- not a very easy one for me actually. I thought about doing some kind of flag design from The Lord of the Rings, but they're all too pretty and intricate for me to have a hope of replicating on my nails... Or something witty to do with Eddie Izzards Flag Sketch, but I couldn't think of anything...

So instead I decided I should be a little patriotic and attempt a Union Flag. Unfortunately, that too was beyond my abilities (I tried, and it did not turn out well...) and in the end I decided to do each of the three flags that make up the Union Flag- the flags of St. George, St. Patrick and St. Andrew- separately, and finished it off with two random nails (the thumb and little finger) with dots in the three colours :) 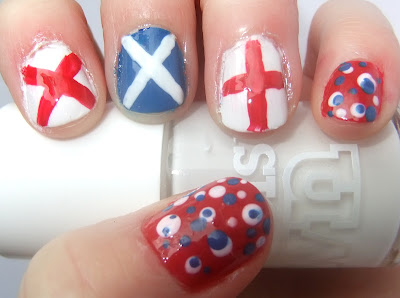 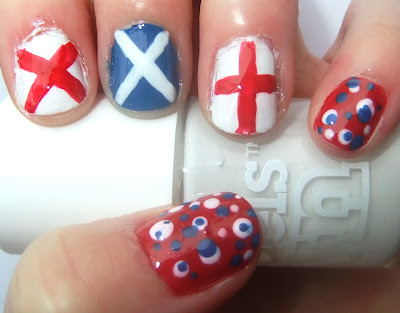 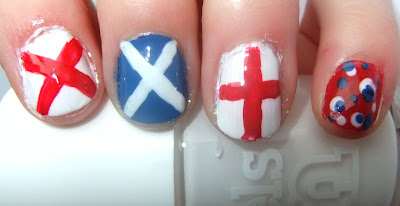 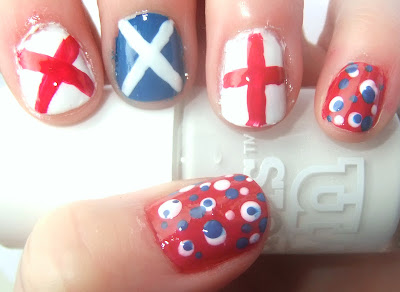 I seem to have used No7 Poolside Blue rather a lot recently, but it's become such a useful colour... I also used (rather predictably) Models Own Snow White and e.l.f. Light Red. I used a couple of nail art brushes to create the stripes, and several sizes of dotting tool to make the dots on my little finger and thumb :)
﻿
﻿

﻿
Have you ever gone all patriotic on your nails? (If so and you're British, how the heck do you get a Union Flag to work!?)
xGretalRabbitx
Posted by GretalRabbit at 19:05

Email ThisBlogThis!Share to TwitterShare to FacebookShare to Pinterest
Labels: 52 week challenge, e.l.f., Models Own, No7, notd