(my sisters) Nail of the Day: Starkid nails!

As my sister has been home for the holidays, she's been spending a lot of time painting her nails in some intricate designs (I'm rather jealous, she's way better with nail art brushes than I am!) Today she's taking over my blog with a guest post about her starkid themed nails (don't worry if you have no clue what starkid is, she will hopefully explain!) And if you really couldn't care less about a 14 year olds obsession, at least you can appreciate the nail art :) I'm sorry she didn't post which polishes were what- she very helpfully can't remember! But I'm pretty sure she used Models Own Snow White, Revlon Peach Smoothie and e.l.f. Light Red and Black (yep, all my polishes...)
xGretalRabbitx

Hi I'm Amy and I'm Louise's sister. I'm 14 and I love Starkid. Now you may be wondering what starkid is well its a group of people who have made several musicals. They became famous by doing a musical based on Harry Potter- they posted it on YouTube and now it has over 7 million views. They then went on to to make A Very Potter Sequel, starship and Me and my dick all of which became very popular musicals and spaceship has also been up for some awards. 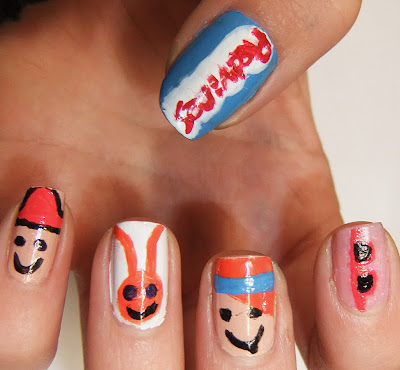 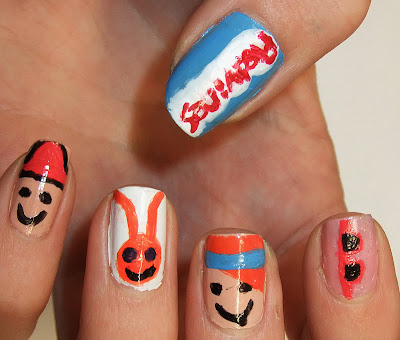 Here are some close up pictures of my nails. 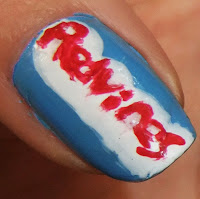 On the thumb I did Redvines. Redvines are an American sweet and in a very potter sequel Ron (Joey Richter) eats them and makes up a quote about them. 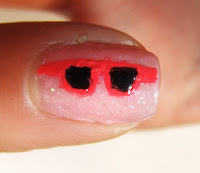 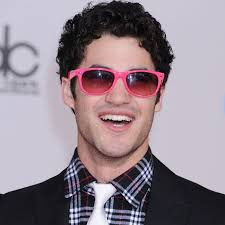 On my middle finger I did Joey Richter wearing his blue headband. He wore this headband during a very potter sequel in order to keep on his wig. He also wore it in me and my dick and starship because it became so popular. 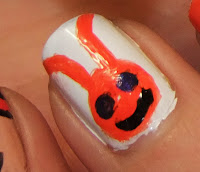 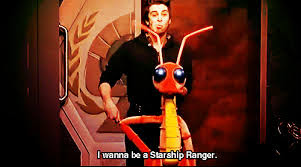 On this nail I did Bug from starship. Bug is a bug who wants to become a starship ranger. 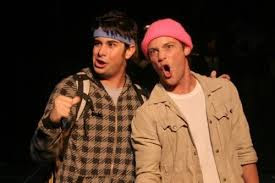 On my little finger I did the dick from me and my dick. Dick is played by Joe walker and he plays Joey Richters Dick.

So thank you for reading I hope you liked my Starkid nails and I hope you will go and watch some starkid musicals. If you like starkid please could you like my facebook page :)
Thanks for reading :) Amy
Posted by GretalRabbit at 21:42