It was my sister's (14th) birthday on Tuesday (sucks to have to go to school on your birthday, my birthday was always smack-bang in the middle of the summer holidays!) so last night she had a (very noisy) birthday party- there were only 7 girls in the house, but they managed to make so much noise, and I awoke to a complete wreck in the living room this morning... but I think they all had fun! :)

Recently she has become a teency bit obsessed with all things Harry Potter after I 'made' her read the books over the summer, (which is definitely not a bad thing- they're awesome books, though she does like the films too...) so naturally she wanted a Harry Potter themed cake. We went through several completely unrealistic ideas that I would clearly never be able to pull off... 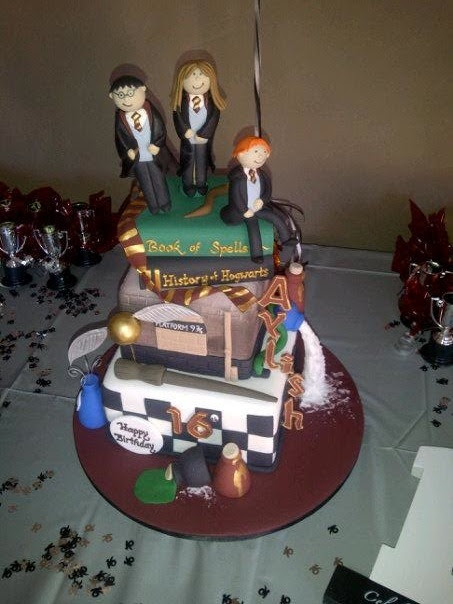 I am definitely not a master cake decorator, but I tried my best- and between me, my sister and her two friends (she roped them into helping decorate our house before the party) we made this cake! 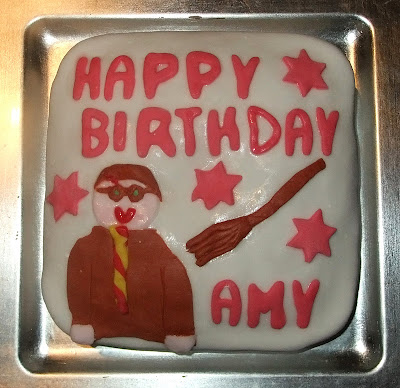 I used my Super-Simple Cupcake recipe; using 4 eggs, I baked it in a (fully lined) square cake tin for approximately 30/35 minutes at 170C. That recipe is so versatile, yet still utterly foolproof :)

There are very few things I buy instead of making from scratch- and fondant icing is one of them, sometimes life is just too short! I bought a 500g pack, and split it into several chunks. The largest chunk remained white- which I rolled out quite thinly, then covered the cake with a thin layer of jam (to help the icing stick) and smoothed the rolled icing over it, trimming off the excess with a knife.

Then we made several colours with various food colouring (we learned a lot about the colour wheel) naturally we had to have a lot of pink (I don't think Amy will ever grow out of her little-girl-pink phase)  brown took a long time (and LOTS of food colouring!) and rolled them out thinly. We had alphabet shaped cutters to help with the lettering, and my sister did most of Harry and his broom, though I did the most important part- his scar!

To attach the decorative icing to the white base I wet the white icing a little (with warmish water) and placed the decoration on the top- and once the water evaporates off, the two pieces of icing will have stuck together.

If I hadn't have told you, would you have guessed it is Harry Potter?

How are your cake decorating skills? Got any tips for me?